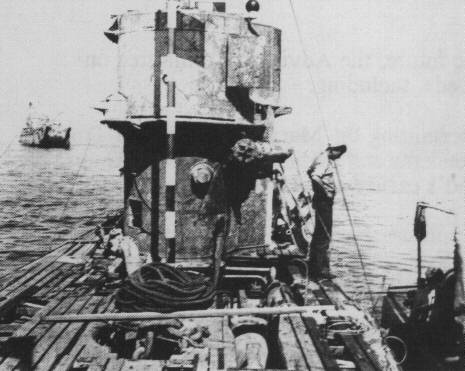 On 20 April 1944, U-1105, a modified Type VII-C German submarine, built at the Nordseewerke Shipyard at Emden, Germany, was launched to begin its brief and dramatic wartime career. U-1105 was one of fewer than ten submarines produced during the war outfitted with an experimental synthetic rubber skin designed to counter Allied sonar devices; the black rubber coating had earned it the nickname “Black Panther.” On its first mission in April of 1945 off Black Rock, Ireland, U-1105 disabled HMS Redmill, a 1300 ton TE Captain Class frigate, with two acoustic torpedoes killing 32 men. The Allied squadron searched for the elusive U-boat, but without success. The Black Panther’s short career ended with Germany’s surrender, and the vessel was eventually turned over to the United States Navy for study and experimentation in the U.S.

U-1105, now officially a war prize of the U.S. Navy, arrived at Portsmouth, New Hampshire in early 1946. In February, research on the unique rubber-tiled skin was initiated at the Naval Research Laboratory in Washington and at the MIT Acoustic Laboratory in Cambridge, Massachusetts. The ship was then ordered to be retained in a state of readiness for explosives testing. In the fall of 1949, U-1105 was towed into the Potomac River to an anchorage off Piney Point, Maryland. The ship was sunk using a new type of depth charge, and went down in 20 seconds in over 91 feet of water, with 65 feet of water over the conning tower. Although upright on the bottom, the pressure hull was cracked open by the explosion all the way around to the keel; but otherwise intact.

MHT is delighted to offer the history of the "U-1105 in the U.S. Navy - 1945 to 1949" courtesy of Air Commodore Derek Waller, RAF (Retd). Air Commodore Waller is available to respond to questions via email.

In 1992-93, the U-1105 wreck site became the subject of an archaeological survey expedition. An error in the transcription of longitude and latitude figures masked its location for decades until the transposition of the figures was discovered and sport divers relocated the vessel. The vessel is in relatively good condition but is buried up to its conning tower in the river bottom and is full of sediment. Supported by financial assistance from the Department of Defense Legacy Resource Management Program, and a cooperative agreement between the Navy and the State of Maryland, the wreck was designated as Maryland’s first historic shipwreck preserve in 1995.

The U-1105 is part of the National System of Marine Protected Areas (MPA) , a program of the National Oceanographic and Atmospheric Administration (NOAA). The program was launched in April 2009 and the U-1105 Preserve is one of the Charter members of the system. MPAs are defined areas where natural or cultural resources are given greater protection than in the surrounding waters. In the U.S., these areas may span a range of habitats including the open ocean, coastal areas, inter-tidal zones, estuaries, and the Great Lakes.

Visiting the U-1105 Preserve 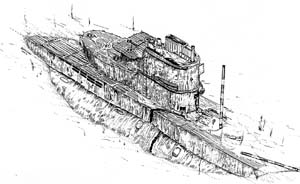 There are no commercial charters to the site and with the top of the conning tower at 65 feet below the surface, near-zero visibility and a swift current running constantly, it is an advanced dive.

In order to maintain and monitor the condition of the U-1105 shipwreck preserve, the Maryland Historical Trust requires data about the number of divers visiting the site and the frequency of these visits. These forms can be filled out by individuals or groups, and can be submitted periodically or after each visit. If you have already visited the U-1105 shipwreck preserve please report any damage or vandalism observed during your visit and/or any suggestions you might have.

In the event of a diving emergency, first call 911 and contact Coast Guard on VHF radio channel 16, then call DAN (Divers Alert Network) at 919-684-9111. Call DAN collect if necessary in an emergency and ask for a diving physician.