ANNUAL FIELD SESSION POSTPONED: Due to the limitation of public access to M-NCPPC owned and managed properties, the Annual Field Session WILL NOT be held from May 22 to June 1. MHT will coordinate with the Archeological Society of Maryland to determine a date in Fall 2020 for the Field Session at Billingsley.

This cooperative venture between the MHT Archaeology Program and the Archeological Society of Maryland runs 11 days, inclusive of weekends and the Memorial Day holiday, and is open to the public. The purpose of the Field Session is to train lay persons in archaeological methods and teach Maryland's past through hands-on involvement, while making meaningful contributions to study of Maryland archaeology.

The annual Field Session, now in its 49th year, has investigated sites ranging from Archaic camps to Late Woodland villages to historic mills and plantations. It has been held in 14 of Maryland's 23 counties, and has examined 34 different sites. 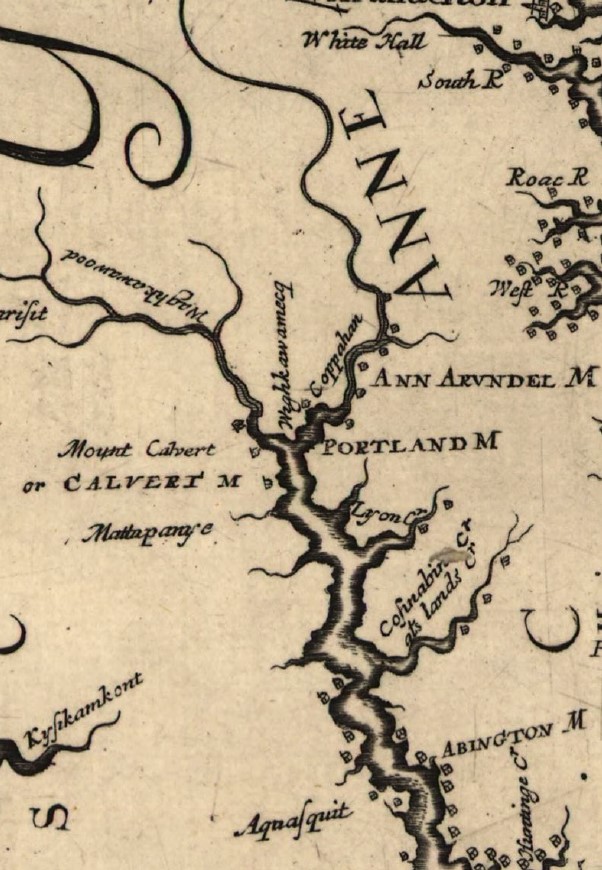 Site location on the 1670 Augustin Herrman Map of the Chesapeake

Last year's excavations were held at Billingsley House near Upper Marlboro in Prince George's County. Owned by the Maryland Department of Natural Resources, Billingsley is operated as a historic house museum by the Maryland-National Capital Park and Planning Commission (M-NCPPC), who have graciously agreed to host and to assist with the excavations and project logistics this year.

Though the house museum dates later (to the 18th century), the site is the core of a 700-acre tract that was patented to Major John Billingsley in 1662, "…for transportation of 14 servants in the year 1650." Though it's pretty clear from the archival record that Major Billingsley never actually lived on the property, a European-built structure is depicted on the parcel on a map of the Chesapeake published by Augustine Herrman in 1673 (and drafted much earlier). Whether or not this structure depicts an actual dwelling or is merely intended to symbolize surveyed and patented land is still an open question. What is not in question, is that the tract was inhabited.

The Herrman map marks the presence of not one, but two 17th-century Indian villages on the Billingsley parcel: one named "Wighkawamecq" and the other, "Coppahan." In addition, the Proceedings of the Maryland Assembly on May 23rd, 1674 make it clear that Billingsley purchased his 700 acres from the "Mattapany and Patuxon Indians," at least some of whom, "…doe Continue upon the Land." This statement, as well as Herrman's map, strongly suggest that two indigenous groups were living on this land in the mid 17th century. In late 2018, MHT Archaeology staff conducted a magnetic susceptibility survey of the fields at Billingsley in order to identify areas of past human activity. The magnetic susceptibility of surface soils can be influenced by past human activity such as burning, digging, the introduction of organic matter, and the introduction of foreign stone or other raw materials. Prehistoric artifacts had been recovered from the site, and hearths from ancient cooking fires would be expected to influence the magnetizability of the soils on-site. 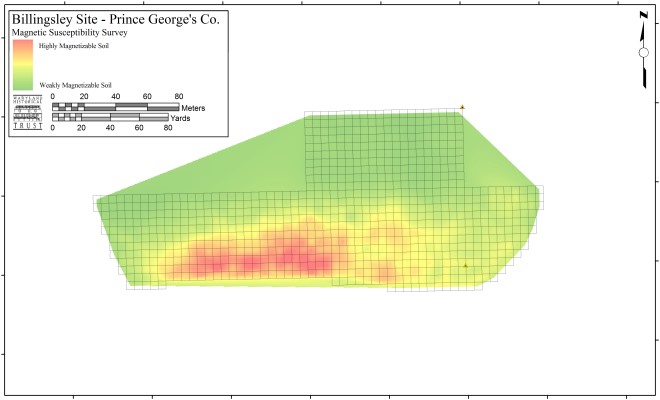 MHT identified a roughly 1.3 acre anomaly of culturally modified soils at Billingsley. Furthermore, the location of this anomaly matches almost perfectly the location of the "W" in "Wighkawameck" on the 17th-century Augustine Herrman map. The principal goal of the field session, this year, will be to investigate this anomaly and determine if evidence can be located tying the cultural deposits within the anomaly to the 17th century Indian village of Wighkawamecq.

MHT and the ASM will be returning to the Billingsley Site for the 2020 Field Session. However, due to the ongoing COVID-19 pandemic, the traditional dates from the Friday before, to the first Monday following Memorial Day will not be adhered to. We are working with the Archeological Society of Maryland and M-NCPPC to determine dates in Fall 2020 for the Annual Field Session.

For more information on the field session, or on how to join the Archeological Society of Maryland, contact Dr. Charlie Hall at (410) 697-9552.