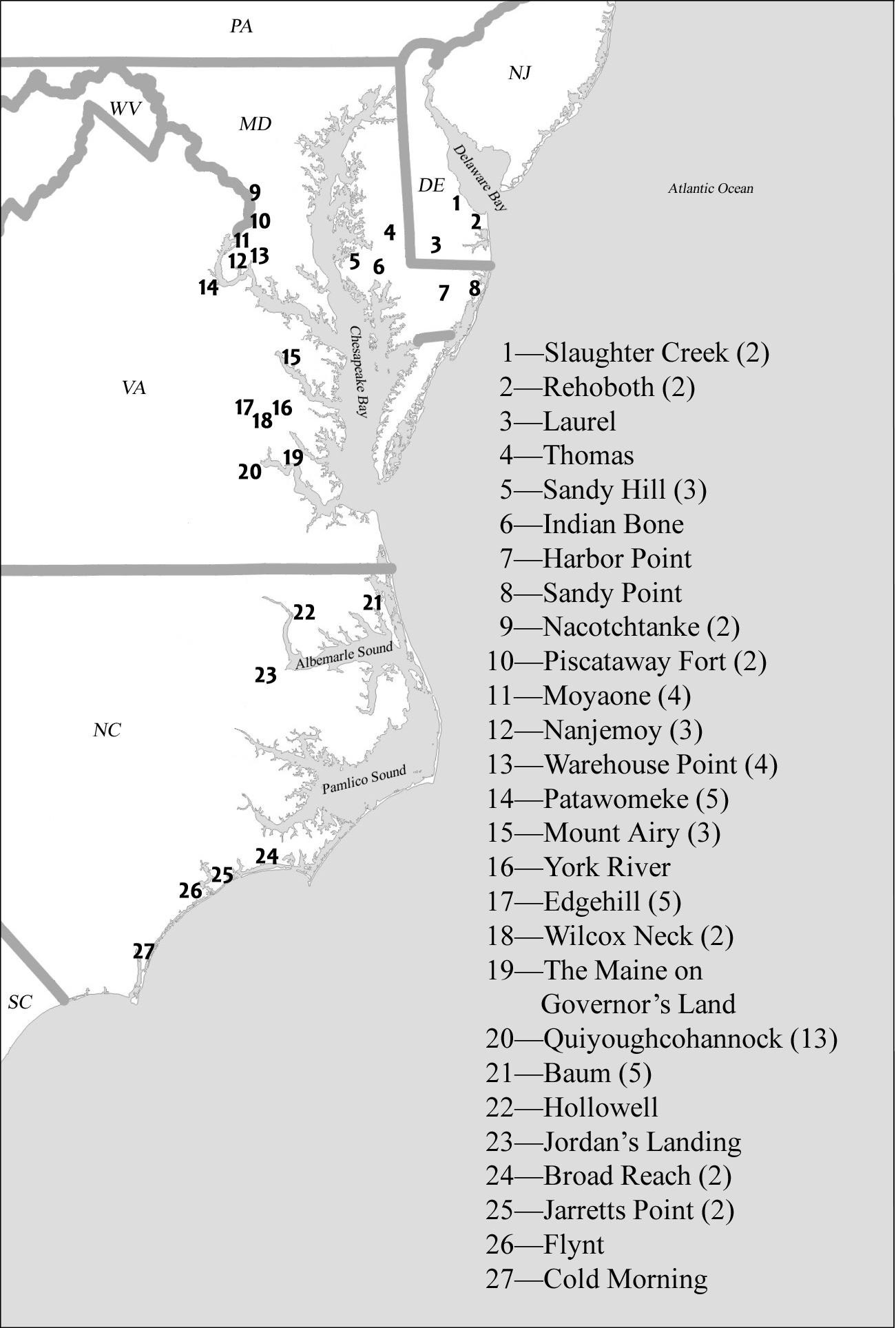 IT HAS BEEN MORE THAN A DECADE since Dennis C. Curry published Feast of the Dead: Aboriginal Ossuaries in Maryland, a comprehensive study of aboriginal ossuaries in Maryland. During that time, Curry continued to compile data on ossuaries, expanding his study area beyond Maryland to include the entire Middle Atlantic region. The results of this further study have been published recently in a journal article which explores the various "mechanics" of ossuary burial, including discussions of primary burial treatments, preparations for secondary burial, and the eventual mass reburial of multiple individuals in a communal grave pit. This review takes a largely archaeological perspective, and as such describes known Middle Atlantic ossuaries (from Cape Henlopen, Delaware to Cape Fear, North Carolina), reviews historical accounts and archaeological evidence, and compiles traits common to these features. Particular attention is paid to the internal structure of these ossuaries to challenge the assumption that these features were merely "jumbles of bones." Also examined is the role that these mortuary features may have played in the social landscape, exploring status from both individual and community perspectives, and perhaps setting the stage for future interpretations of the meanings of ossuaries. 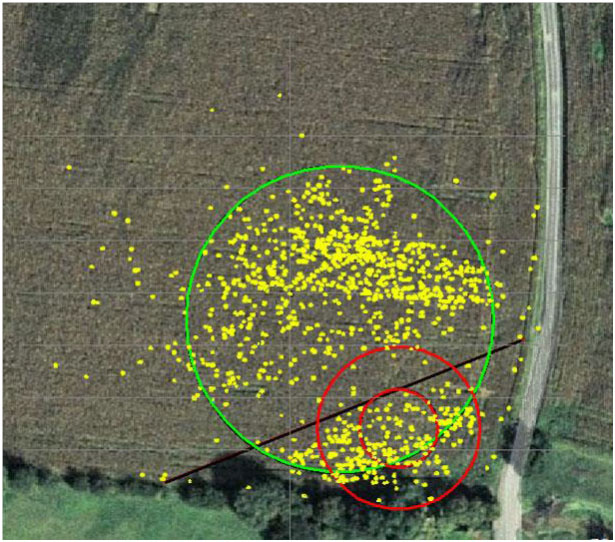 THE BIGGS FORD SITE is one of the first archaeological sites excavated by state archaeologists in Maryland, with salvage excavations undertaken in 1969 prior to installation of a sewer interceptor. Excavations revealed what appeared to be two overlapping Late Woodland villages—one from the Montgomery Complex, and one from the Keyser Complex. In the spring of 2009, the site was plowed for the first time in many years, and State Terrestrial Archaeologist Charlie Hall quickly arranged permission to carry out a controlled surface collection designed to test the notion of overlapping circular villages. Using a total station, the precise location of every potsherd seen on the surface in the vicinity of the Biggs Ford site was collected along with the artifact. (Pottery was targeted as it promised the ability to distinguish between the two villages, while both the Montgomery and Keyser villages would be characterized by similar lithic assemblages.) More than 1,100 potsherds were collected, and the fit between their distribution and the two projected circular villages was quite close, supporting the interpretation of previously mapped features and the proposed two village hypothesis. As part of the Annual Field Session in Maryland Archaeology, MHT archaeologists—in cooperation with the Archeological Society of Maryland, American University, and Towson University—returned to Biggs Ford in 2013 to undertake 11 days of excavation; that work continued during the 2014 add 2015 field sessions. 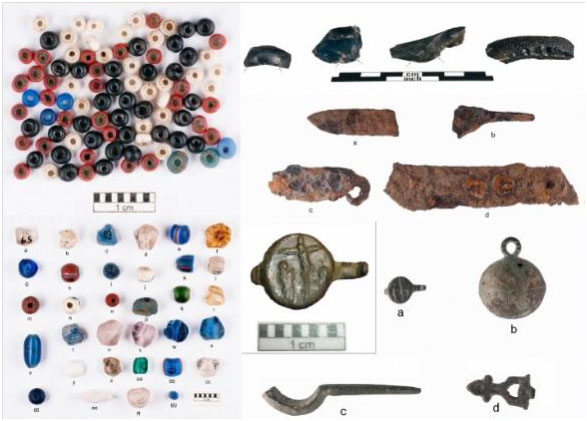 HEATER’S (CONOY) ISLAND, located in the Frederick County portion of the Potomac River, served as the site of the last permanent Piscataway Indian settlement in Maryland, from 1699 to around 1712. Here, in relative isolation, the Piscataways erected a fort, established a thriving community, survived a 1704 smallpox outbreak, and saw their population rebound before ultimately abandoning the island and migrating to Pennsylvania and parts north. In 1970, the University of Maryland–College Park held its first archaeological field school (at the time, one of only five in the country to investigate Contact period sites) at Heater’s Island, under the direction of Robert L. Schuyler. The 10-week session resulted in the excavation of 120 five-foot-square units, recovered a wide range of trade artifacts, and exposed a number of features, including a bastion of the fort. Due to various circumstances, however, a site report was never prepared, and the artifacts and site records remained in storage with Schuyler at the University of Pennsylvania. The Maryland Historical Trust sought to have the Heater’s Island collection returned to Maryland (the island is now state property, having been purchased in 1972), and in 2004 the transfer was accomplished. Since that time, Dennis C. Curry has worked to prepare a site report—now nearly complete—for the 1970 excavations.

» "We have beene with the Empeour of Pifcattaway, att his forte": The Piscataway Indians on Heater’s Island (Dennis C. Curry, presentation at 2014 Middle Atlantic Archaeological Conference) 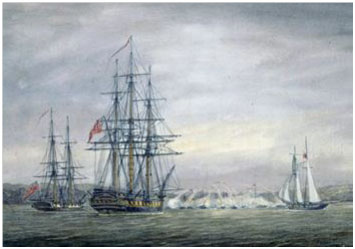 The current work involved battlefield analyses utilizing the METT-T approach and the KOCOA method related to six naval engagement sites in Maryland: the loss of Cato and Hawk at Cedar Point (1781); the Battle of Kedges Straits (1782); the raids on Frenchtown and Elkton (1813 and 1814); the raids on Georgetown and Fredericktown (1813); the Battles of St. Leonard’s Creek (1814); and the Battle of Baltimore (1814). Battlefield analyses guided reconnaissance-level underwater archaeological fieldwork intended to identify areas with potential to contain physical evidence of the engagements. Results and recommendations are included in the final report "Naval Engagements of the Revolutionary and 1812 Wars in Maryland".

» Naval Engagements of the Revolutionary and 1812 Wars in Maryland (National Park Service report, 2013) 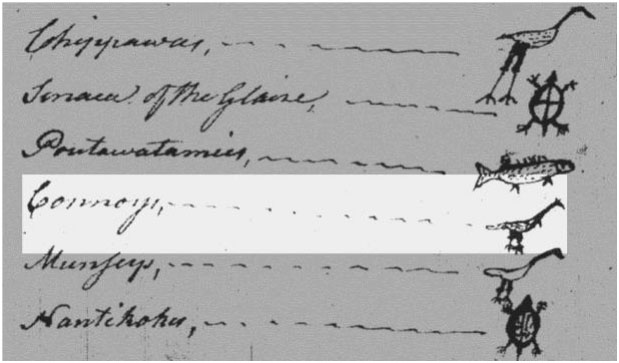 FOR MORE THAN A CENTURY, anthropological and archaeological literature has repeated variations of the statement that the Piscataway (Conoy) Indians “made their last appearance as a separate tribe at a council held at Detroit in 1793.” Often added to this remark were the facts that the Piscataways used a turkey symbol as their signature, and only 50 tribal members remained in 1793. Dennis C. Curry examined these statements in detail, concluding that one is flat-out wrong, one is true, and one is plausible.

ENIGMATIC BIRDSTONES have intrigued antiquarians and archaeologists in eastern North America for more than a century. In 1959, Earl C. Townsend, Jr., published a descriptive compendium entitled Birdstones of the North American Indian, which illustrated hundreds of known birdstones. Yet, little is understood about these rare artifacts and—especially in Maryland—they have received little serious study. In fact, in 2009 a published survey of birdstones from the northeastern United States asserted that “no examples of birdstones are known from Maryland.” Knowing that this was not the case, Dennis C. Curry set out to document the handful of specimens of which he was aware. The list of Maryland birdstones soon grew to more than a dozen examples, representing nine Maryland counties, and leads on others were gathered. Clearly these stone carvings were a notable part of Maryland prehistory and—once an accurate inventory is compiled—warrant in-depth investigation. Read Curry’s article from Pennsylvania Archaeologist. 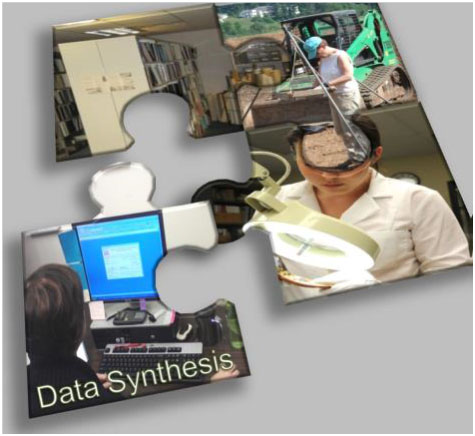 MHT’S ARCHAEOLOGICAL SYNTHESIS PROJECT, begun in 2007, is an ambitious attempt to make cultural resources management’s “grey literature” more accessible to researchers, planners, and the general public. The project—largely undertaken by Dr. Matthew McKnight—is examining Phase II and Phase III investigations undertaken in Maryland during the past four decades, culling out the most important findings of those studies, and organizing the archaeological data in a searchable database. Funding has been provided by the MHT Board of Trustees and the Maryland State Highway Administration’s Transportation Enhancement Program. To date, nearly 1200 reports have been examined and synthesis reports have been prepared for more than 1000 sites. For a more detailed look at MHT’s archaeological synthesis project, click here. 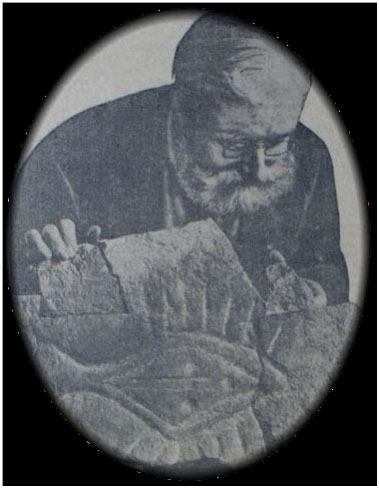 THE BALD FRIAR PETROGLYPHS have inspired public curiosity since colonial times, and have been the object of scientific study for more than a century. Originally located on a series of small islands in the lower Susquehanna River, the petroglyphs were threatened by construction of the Conowingo Dam in the late 1920s. In response to this threat, members of the Maryland Academy of Sciences sought to retrieve the glyphs before they could be inundated by the Conowingo reservoir. Dynamite was used to extract the glyphs from the rocky outcrops, freeing the glyphs, but damaging many in the process. The better-preserved and more fully-reconstructed glyphs were put on display in various parts of the state, but perhaps the bulk of the removed stones were eventually stored in a pile on the grounds of Druid Hill Park. In early 2006, State Terrestrial Archaeologist Dr. Charlie Hall and the Office of Archaeology worked with interested parties to transfer these stored glyphs to Jefferson Patterson Park and Museum, where they can be preserved, studied, and made available for display. The actual move of the glyphs took place during the spring of 2006.

» LEARN MORE ABOUT THE MOVE 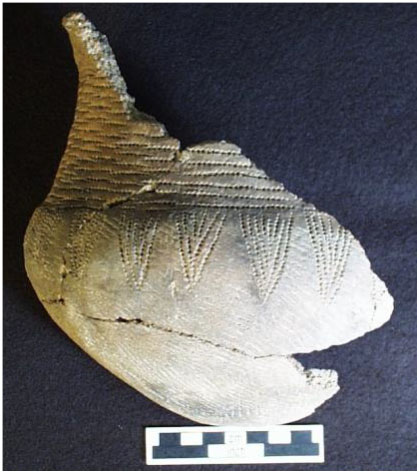 THE ROSENSTOCK VILLAGE SITE—one of the largest and best-preserved components of the Late Woodland Montgomery Complex—was excavated by the Archeological Society of Maryland, Inc. in cooperation with the State's Office of Archaeology in 1979 and 1990-1992. The 1.5-acre site, located on a bluff overlooking the Monocacy River in Frederick County, is roughly circular as indicated by an arcing line of trash-filled pits. No palisade has been found at the site despite concerted efforts to locate such a feature. Likewise, postmold patterns for domestic structures have yet to be discerned, although some household features point to general house locations. Two semi-subterranean “keyhole” structures—presumably sweatlodges—have been identified. The artifact assemblage is predominated by Shepard ware ceramics, as well as implements of quartz, rhyolite, and bone. Subsistence evidence includes carbonized corn and beans and a wide array of faunal remains including mammals, birds, reptiles, and fish. Radiocarbon dates roughly place the site in the A.D. 1335-1400 time period.

THE OLD COPPER CULTURE in Maryland? It sounds far-fetched, but a number of classic Old Copper artifacts reported from Maryland's Eastern Shore suggest that it may be so. The copper artifacts include several spear points, a fishhook, a crescent, and a socketed-axe, or spud. 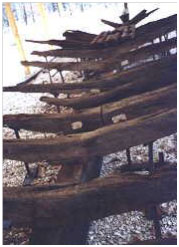 THE MARYLAND MARITIME ARCHAEOLOGY PROGRAM undertook a cooperative effort with Department of Natural Resources staff to research and reconstruct a shipwreck found in Martinak State Park. Known as the “Martinak Boat,” the wreck has been described as the wooden remains of a 19th century Pungy schooner, a vessel type whose beginning is generally accepted to be the late 1840s. Pungies were oyster and fishing boats that plied the Chesapeake Bay until the late 19th century. While photographs and drawings of pungies exist, verified wreck remains or construction plans have yet to be found. As a result, without corroborating artifactual evidence (no artifacts were found on or near the wreck site), the exact date for this boat may never be known, although there are certain construction details and fastener types that may indicate an older date for the vessel. Adze (woodworking tool) marks, fasteners, and construction style hint that the vessel may be a schooner or sloop dating to between 1780 and 1820. The reconstructed timbers from the “Martinak Boat” are on public display at Martinak State Park in Caroline County. 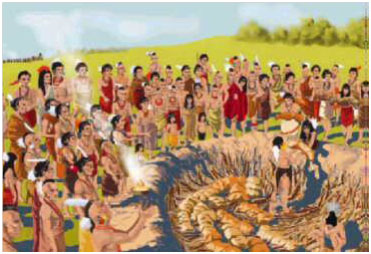 This ossuary illustration, rendered by Mark Offutt, is taken from Curry's article "Mysteries of Mass Graves."

OSSUARIES ARE SECONDARY GRAVES that are the end result of an elaborate burial rite. Individuals who died were buried or otherwise allowed to skeletonize, their bones were later collected, and then they were reburied in a communal grave. In Maryland, Native Americans practiced this mortuary custom late in prehistory and into the Contact period. Using existing archival materials, archaeological site files, published and unpublished reports, and first-hand observations, Dennis C. Curry published Feast of the Dead: Aboriginal Ossuaries in Maryland, a comprehensive study—from an archaeological perspective—of aboriginal ossuaries in Maryland. More than 30 ossuaries, representing some 3,000 individuals, are discussed in Curry's book. Particular attention is paid to the various aspects of each ossuary, such as the circumstances of site discovery and study, site setting, dimensions of the grave, evidence of any intentional arrangement of the remains, number of individuals represented, physical anthropology, and associated artifacts. The oldest ossuaries in Maryland are estimated to date to around A.D. 1400, and they continue to be used well into the Contact period as evidenced by the presence of trade goods (such as the glass beads) associated with the later ossuaries, especially in the lower Potomac region. 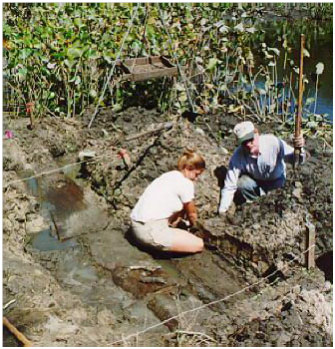 THE WATER-SATURATED REMAINS of a large wharf structure were investigated at 18th century Pemberton Hall near Salisbury on Maryland's Eastern Shore. The squared timbers, some of which exceed 18 inches in diameter, are located in a tidal flat and are believed to be part of historic Mulberry Landing. Work included both the illustration and photodocumentation of the wharf components and associated construction debris and artifacts. Dendrochronology dating undertaken on the timbers revealed that the wharf had to have been constructed prior to 1748. The project to uncover and document the remains was undertaken by volunteers from diverse backgrounds and interests under the auspices of the Board of Directors of Pemberton Hall in cooperation with Maryland State Underwater Archaeologist, Dr. Susan Langley.